Vehicle Assembly has come an awfully long way since the days of Henry Ford.

While Ford famously innovated with breakthrough ideas that have shaped manufacturing assembly lines for over a century, he also sidestepped some integral production challenges by limiting customization. Ford famously made his original Model T available in one color: black. That is clearly not an option today. Today, whether with automotive, recreational vehicles, buses and commercial transportation, military vehicles, and even aircraft, complexity and customization are inherent and inescapable pieces of the vehicle assembly puzzle.

Understanding the complexity involved in modern vehicle manufacturing is a critical first step in appreciating how and why finding new ways to control and refine production processes and satisfy the demands of product proliferation, data gathering and automation integration remains a formidable challenge for automotive professionals.

Vehicle assembly facilities represent a junction point in the production process as a destination for components supplied by a global network of more than 4,000 outside suppliers. Modern assembly lines utilize varying degrees of automation to accomplish previously unimaginable levels of efficiency. While some fully automated lines exist, the majority achieve their best results by blending human skill and ingenuity with mechanized automation to achieve new levels of precision and consistency while handling work that is considered too dangerous or demanding for human operators.

Increasingly sophisticated automation has dramatically increased quality control. One of the biggest and most important shifts in modern vehicle assembly has been the evolution of quality control from what was formerly akin to a “final inspection” process to an approach that complements holistic inspections by building quality and consistency into the assembly process itself. Modern vehicle assembly environments use quality audit stations and new vision systems to check for defects at virtually every step of the assembly process.

While modern vehicle assembly environments reflect technologies and processes that have evolved in thrilling and transformative ways, that sophistication is a double-edged sword: a tool that introduces even more complexity. Which is why, for all the power that it affords, the different layers of the modern manufacturing stack have introduced formidable new technical and logistical challenges. Vehicle assembly has become increasingly costly and cumbersome, with large numbers of expensive parts and processes that need to be modified to achieve the customization and variability demands of the modern market.

The complexities and difficulties involved in upgrading or adding to legacy systems is another obstacle facing vehicle assembly.

Complicating the situation is the state of the industry’s existing PLC and HMI infrastructure—some of which has been in place for decades. These highly engineered systems are very inflexible, very costly, and include cumbersome layers of tech that limit connectivity and compatibility with new parts and processes.

Essentially, the industry has innovated itself into a corner.

Happily, the advent of a new generation of digital technologies, collectively referred to as Industry 4.0, is heralding a transformative breakthrough: a shift some observers have characterized as impactful as a modern-day industrial revolution. That impact is less about automation than it is about insight, and less about nuts and bolts than it is about data.

The assembly line of tomorrow (and, in some places, today) is collaborative, sophisticated, flexible, dynamic, and adaptive. It is capable of facilitating communication between operators and higher-level decision-makers while gathering, processing and presenting key data in real time.

With the new visibility, flexibility, and connectivity afforded by these technologies and emerging solutions, vehicle assembly is on the cusp of achieving a new level of optimized synergy between automated functionality and human operators.

The best example of this new generation of breakthrough solutions is the Manufacturing Integrated Platform (MIP). Vehicle assembly professionals can utilize a MIP to bridge the digital divide and address the issues presented by legacy systems, aging infrastructure and outdated technology—while simultaneously overcoming the challenges of a digital transformation.

A high-end MIP solution essentially replaces almost all of the layers of the traditional automation stack: a cost-effective, game-changing solution for plant floor control, visibility and error-proofing, making it easier than ever before to configure and manage production environments, standardize work instructions and process control, and monitor and enforce quality standards.

Even better, they deliver those new capabilities and functionality with a level of elegant and inherent simplicity that seamlessly integrates with or even replaces the inefficiency of legacy systems and infrastructure. In a space where additional functionality has almost always introduced new complexity, the MIP offers a dramatic and game-changing paradigm shift and a new way forward for manufacturers everywhere.

In an industry that has not only thrived on innovation, but both embodied and inspired it—it isn’t particularly surprising to discover that vehicle assembly environments are once again at the forefront of transformative manufacturing breakthroughs. In a future defined by data and shaped by powerful new digital dimensions, industry leaders are already moving quickly to invest in these new tools and technologies.

To learn more about MIP and how it is revolutionizing vehicle assembly for the digital era download the free brochure below. 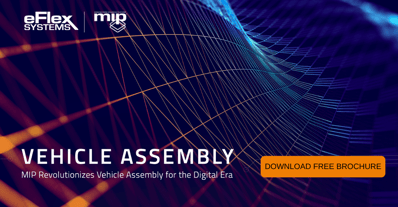