Connecting socially outside the office can be a challenge. At eFlex, a bowling league has helped team members across the company spend time together without having to invoke the word "meeting". Discussions of deadlines, manufacturing equipment, and server maintenance are replaced by talk of splits, strikes, turkeys, and the occasional four-bagger. Across the street from the eFlex headquarters in Rochester Hills, Mich., is Avon North Hill lanes. On Wednesdays, you can watch a small parade from one building to the other, bowling bags in hand.

Here are three ways a company bowling team can enhance your company culture:

Tracy Streckenbach of the New York Times said “Culture is about performance, and making people feel good about how they contribute to the whole.”

As far as team sports are concerned, bowling strikes a balance between individual accomplishment and team performance. With weighted scoring, which is common in most leagues, you compete against your own average score, while the team score is combined from all players' relative performance. You are competing against yourself while you compete as a team. Every frame is an opportunity to encourage efforts made and celebrate small victories.

During a three-game series, the average bowler walks half a mile. Throwing a ball down the lane 40-60 times each series adds up too. Breaking out of sedentary routines is beneficial to everyone in increasingly desk-oriented workplaces.

Investing in a custom ball and shoes can help solidify a new healthy habit while improving comfort and performance while bowling. It isn't necessary to get started, but it makes a noticeable difference in a short period of time.

Connecting with team members outside the workplaces reinforces the relationships required to work together effectively. Beyond building community as a team, a bowling league is an opportunity to meet others in the local area, many who work together at their respective companies. Taking a team identity outside of the workplace and into the world gives depth and texture to company culture. 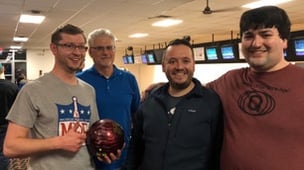