Thinking Outside the Box - Literally 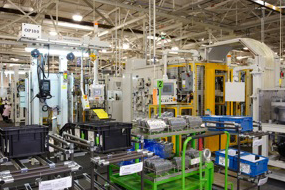 GM realizes “weeks to hours” reduction in line change and transmission build dynamics at Toledo Powertrain, resulting from Flexible Assembly Configuration System (FACS) and Siemens control/communication. A tried and true euphemism nowadays — “thinking outside of the box” — usually refers to a pattern of thought or action that results in rapid innovation, enhanced relationships being developed from established concepts as well as new ones, plus a genuine willingness to forego past practices in favor of a better way. Enter the GF6 six-speed, front wheel transmission line at General Motors Powertrain on Alexis Road in Toledo, Ohio.

Here, a new front wheel drive transmission line for smaller, more fuel efficient vehicles such as the popular Chevy Malibu and new Chevy Cruze is currently ramping up to its initial goal of 2,200 units per day. Nothing new about such an event, until a closer look reveals the method used to program this line, implement changeover, stage the workpiece flow, perform all machining, secondary operations and assemble the finished transmissions.

During the development of this line, several years ago, GM engineering contacted its longtime controls suppliers to investigate ways of significantly reducing the workflow through the line, as well as enable faster changeover, reduce reprogramming, and prevent the curse of all automated manufacturing lines: situations where one out-of-spec machine caused complete shutdown. Another key driver in the development of the GF6 line was the need to minimize maintenance time by installing PLCs, drives, and component pallet recognition devices outside the conventional cabinetry found on traditional assembly lines. In addition, controllers were distributed throughout the system, which allowed for removal of typical zone controllers and, in turn, substantially increased system flexibility.

Following considerable investigation into the process for the new line, the major obstacle remained changeover and the need for a more flexible yet highly automated system of transmission builds. In consultation with the controls provider on the existing six-speed, rear wheel drive line, Siemens Automotive Center of Competence (Troy, Michigan), as well as third-party software package provider, Elite Engineering (Rochester Hills, Michigan), a deterministic study was undertaken and the result was the line now in production. Siemens provided the PLC, CNC, HMI, RFID, and its high-level Ethernet protocol — Profinet — to run on the GM network. Overlaying this hardware and communications topology, Elite Engineering delivered its Flexible Assembly Configuration System (FACS), complemented by Siemens to create its SIFACS solution. 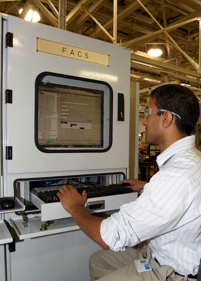 Within any flexible automated assembly system, the keyword is “flexible.” All hardware and related software must be designed with a deterministic functionality that is both valuable to the customer’s build strategy and cost-competitive, as well. Working with technical specialists in safety integrated systems and industrial communications alike was the key to the success of this project at GM Toledo. By creating a decentralized control network that was nonetheless in complete harmony with the overall workflow of the plant, GM and Siemens devised the optimum modular yet flexible architecture for the entire system. This integrated automation approach not only addressed multiple families of hardware involved, it also coordinated all code development, safety, and communications functions into a seamless and interdependent yet highly flexible and adaptive control scheme.

Reinhold Niesing of the Siemens Automotive Center of Competence further explained the contact process between his group and the provider of the FACS. “They provided the configuration and monitoring system, while [Siemens] provided the automation run time system. Both systems needed to run in-sync to provide GM with configurable options, when changes in production or manufacturing enhancements were needed.”

The result of this collaboration, coordinated under the Siemens Transline solution, whereby all operational, visualization, and diagnostic functions are streamlined in a consistent control scheme, was the Transline HMI Lite CE package. This package provides uniform user interface for operational and diagnostic functions on the vast majority of the various machine tools, transfer lines, robotics, assembly machines, sensing devices, and vision systems throughout the entire facility.

As a workpiece proceeds through the line, having been delivered by an AGV in most cases, each pallet is equipped with an RFID tag. Reinhold Niesing, engineering manager on the project for Siemens, explains, “The key here is the data throughput in the system, as it directly impacts the cycle time or takt of the line. The tags must be able to function in static mode, whereby the data on the part must be read before the process begins. Model number, serial number, and build status information are all contained in the tag. The faster we read the information, the faster the process begins.” Niesing also detailed the dynamic mode of operation for this RFID system, in which the information at subsequent line stations must be read “on the fly” without any line stoppage, as is often seen in conventional packaging, shipping or other line applications for RFID. In this case, all data are read as the tag passes by the antenna.

Despite this level of sophistication in the RFID hardware, the system easily communicates over the existing Profinet, Profibus, and other common protocols.

Logic Blocks All Around 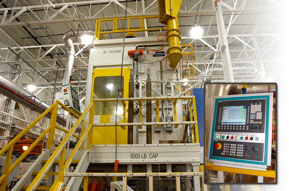 The overall thrust of the line development, according to George Jewell, the GM engineer responsible for the implementation of the FACS online at the Toledo plant, was to have consistent logic blocks at every station. This would allow, as is seminal to the FACS architecture, immediate successive modifications to be made in the machine or assembly operations performed, throughout all stages of the line. When rebalancing was needed, when an upturn/downturn in current production was required or when an entirely new model came onto the line, the changeover needed to happen in hours — rather than in weeks — as was the industry norm.

By standardizing on the hardware, software and communication protocols used, engineering costs could be contained and, as a collateral but vital side effect, maintenance on the system could be made much more efficient with much of the system hardware exposed on the line, rather than enclosed in electrical cabinets. Flexible modules would allow more rapid reconfiguration, product changes, and a genuine synergy with the ongoing GM commitment to continuous improvement in the line, as the new GF6 transmission ramped up to incremental target levels of production.

Rather than textbook product life cycle management, Jewell sees FACS as more of a production line life cycle management tool, as its inherent adaptability means common hardware can be made to do diverse tasks, at varying rates, with on-the-fly changeover, in far less time than previously possible.

On one automated assembly station, Hanwha produces the various sub-assemblies of the transmission, as other lines produce the components that go into the sub-assemblies. Adding a station, as Greg Nazareth, GM controls engineer, explained, requires simply adding a PLC with the standard SIFACS logic, desired process devices and downloading an eFACS configuration. In contrast to the traditional zone control, this reconfiguration is not a building block concept; rather, the instructions being given impact the entire line. Nazareth worked with the full GM controls team, headed by Ron Goeckerman, to implement FACS with the host server.

By contrast, all manual workstations on this line have the same download received to a PLC, provided by Siemens in its Simatic lines. While not reliant on the server network in a deterministic mode, the manual stations nonetheless utilize the same software to execute quick tooling changes, machine sequence variations, line balancing and report tracking. Operators received training from both Siemens and Elite Engineering personnel for these tasks.

All part build histories, troubleshooting and machine debugging are recorded for further analysis.

Safety features are numerous here, resulting in a complete failsafe system across all Siemens Simatic PLC, I/O devices, and safety-integrated drives. All safety devices are networked over Profisafe protocol, a certified safety network, eliminating time-consuming and difficult to maintain traditional hardwired safety connections. All safe I/O, failsafe drives are part of the Siemens Totally Integrated Automation (TIA) protocol. Since it is fully integrated, this protocol provides comprehensive system diagnostics, which can help guide maintenance staff to exact fault location and mitigate downtime. Since the drives, starters, and machine safety are integrated into the multi-functional machine mount I/O system, Simatic ET 200pro, the overall engineering complexity is reduced because of simplicity in panel design, wiring architecture and seamless integration to the project level hardware configuration, which is reduced due to the totally integrated automation design.

Between the two lines here, GM Toledo has invested $872 million on its six-speed, rear- and front-wheel drive transmission production at this 2 million square-foot facility, which currently employs 1400 employees, most members of UAW Local 14.

As George Jewell, the GM engineer who spearheaded the implementation of FACS, stated, “From our first installation in Ramos Arizpe (Mexico) to this Toledo plant, we’ve seen great results, with activities that took months reduced to weeks and what took weeks reduced to hours. There’s less ramp-up time, plus the changeover and line balancing upsides are already proving this was a beneficial investment.”